Last updated 27 October 2010. Added the names of 2 more paintings (bold emphasis) of A.P.Duerinckx to the list. Please see the list of paintings by Adrien Paul Duerinckx, at the bottom of this page. There must be other paintings--let me know so we can add to this list--thank you! Previously, added the youngest sister of Adrien Paul, named Antoinette Duerinckx (thanks Jeanne Lemaire-Sindorff). I have gone through the microfilms from Boutersem, including 2 ordered early December--we are at a standstill. 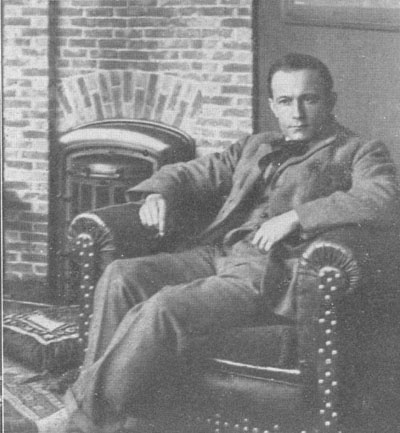 
Henricus Durinx ("Henri") (estimate born 1700-1710--NOT in index for Boutersem) and Catherine Leral, who were married in Boutersem on 24 February 1732. ***The marriage record has no ages or where they were born. There are 2 death records for Henricus Durinckx, one died May 31, 1763 (one index had 1761, another 1762), the other Henricus Durinckx died Sep 10, 1763. Unfortunately, the death records do not give an age or where born, or the parents of the deceased. So far they had 3 children:

Another Duerinckx family in Boutersem records:
Parents Simon Duerinckx, born in Kerkom ~1828, 26 years old in 1855, 30 in 1858, married Anna Catharina Geens (she was related to the veldwachter Petrus Geens who was present at many of the baptisms at this time period in Boutersem, probably in an official capacity. I found 2 children of Simon and Anna: Petrus Franciscus Duerinckx, born June 3, 1855, baptized June 4, 1855: "geboren te zijn alhier, te Butzel, gisteren", which I think means that on June 3, yesterday, Petrus Frans was born in Butzel, but baptized in Boutersem.kd The other child was Ludovicus Duerinckx, born March 5, 1858 and baptized March 6, 1858 in Boutersem.

Notes on Nel Duerinckx and Rik Wouters (b. Mechelen 1882-1916 Amsterdam)
Nel, the wife of Rik, was the favorite subject for all of Rik's paintings. Rik was a soldier in World War I. He was interred as a prisoner of war in Camp Zeist, Netherlands. Rik Wouters died of cancer of the upper jawbone (kaakbeenkanker) 11 april 1916 in a sick house, and was buried at the church house Buitenveldert in Amsterdam. Eight years after his death his body was transferred to Belgium and to the cemetery by Bosvoorde.

1. Huile sur carton "Meules de foin" (English: haystacks). Signé en bas ŕ gauche A.P.Duerinckx et daté 1926. Ecole belge. Dim.:24x32cm. (posted on a Belgian auction web site from 1999)
2. According to "Le peintre A.P.Duerinckx" by Joseph Conrardy (1927), page 44, mentions that the Galerie Georges Petit of Paris has (or had?) a series of small pictures (when talking to his family, A.P. Duerinckx called them his "studies") representing the old corners of Belgium. These would be nice to see historically because the one regarding Brussels would show Brussels as it existed before being destroyed in the war. Page 57 and 58 also mention the "tableautins, ces petits coins perdus, tous ces vieux vestiges d'Audenarde, de Gand, de Bruges, de Bruxelles en particulier." (see also page 59 ~ Bruxelles).
3. Finally, in January 2005 a man in Germany inquired if I or others would be interested in an oil painting (tableau) of A.P. Duerinckx showing wheat stacks: oil on canvas , signed lower left A.P. Duerinckx, monogrammed and dated 1924 on the stretcher, size 68 x98 cms, good condition, scene is a harvest landscape with a distant village, "unusual" skies. Superb period frame. Price sold approximately 800 euros. Of course this is the famous painting exhibited in Antwerp in 1924, called "Chaumes aux derniers rayons": 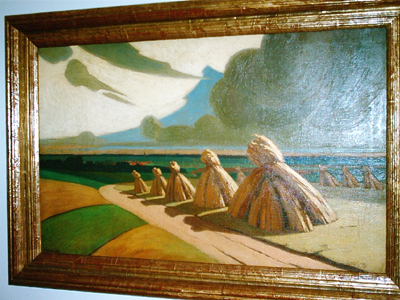