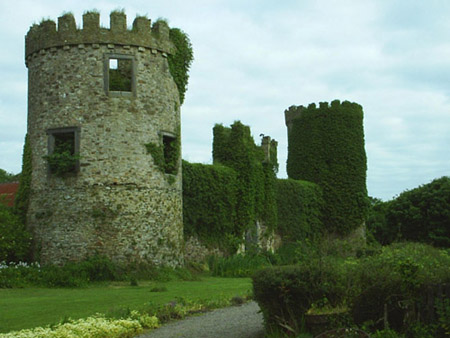 Scope: An Irish Keeffe, Keefe, O'Keefe, O'Keeffe page for those originally from the area of the townland Coolnahau, County Kilkenny, Ireland, and to those relatives in nearby townlands, towns and counties. Coolnahau was comprised of 522 acres in 1857, and is located in Knocktopher Barony, Jerpoint West parish, New Ross (Poor Law Union) [ Townlands of Co. Kilkenny, Ireland]. The Coolnahau Keeffe's, many of which emigrated to the area of Rochester, Monroe County, state of New York, USA, are also related to the Cappagh Keeffe's (Knocktopher or Ida Barony?).


LAST UPDATED: 19 November 2009 regarding a NEW O'KEEFE Y-CHROMOSOME DNA PROJECT for testing O'Keefe males of all different clans, at Family Tree DNA of Houston, Texas, USA. For more information, contact Family Tree DNA. I also have some pages that go through the hows and whys. Look for links at: Kevin Duerinck Genetic Genealogy Pages

(Thanks previously to Mary Fitzgerald; also Jon O'Keeffe of West Virginia and his father from Florida for the picture of O'Keeffe Castle in Dromagh, in the barony of Duhallow, County Cork, Ireland.)

Note on the connection between the Coolnahau and Kilree (both are townlands) Keeffe's from Mary Fitzgerald: "My mothers maiden name was Kathleen OKeeffe {she only died on 30th August 2006 aged 92 years and 7 months} from townland Kilree, Stoneyford (but nearer to Kells) Co. Kilkenny. Some year after being evicted from their lands in Cork the O Keeffe's came to townland Knockwilliam Ballyhale Co. Kilkenny in the early to mid 1700's, and some time in the late 1700's to early 1800's some of them moved to Coolnahau and Kilree about 5 miles away and are still farming in Kilree. The Coolnahau OKeeffe's and Kilree OKeeffe's are the same O Keeffe's. I was told a Coolnahaw OKeeffe married an OKeeffe from Highcappa so they became related. My grandfather's christian name was Edward O'Keeffe (Ned.), my great grandfather was Martin O'Keeffe, my great great grandfather was Edmond (Ned) O'Keeffe, and my great great great grandfather was Larry O'Keeffe. My mother gave me a lot of information on the O Keeffe relations back generations."
Kind Regards,
Mary Fitzgerald

From Grainne O'Keefe, of a clan from Stoneyford/Stonecarthy Ireland, 6 August 2009: "Sean Raggett has a farm still in Stoneyford and is the grandson of Mary O'Keeffe (she was daughter of Patrick and Ellen Keeffe/O'Keeffe, married a Raggett and her daughter was my grandmother on my mother's side). We're not sure where exactly the O'Keeffes were in Stoneyford but the sons of Patrick were Michael (m. a Dwyer), Thomas and Richard b. 1870d. 1936. There's a great website which has photos of gravestones in Kilkenny ttp://www.kilkennygenealogy.com and we know that one of the Raggett named graves actually has previous O'Keeffes buried there so it was originally an O'Keeffe grave. We found records from Griffiths valuation of Patrick and Richard O'Keeffe in Stonecarthy which is a stones throw from Stoneyford and on the way to Kilree I guess? For the icing on the cake, Patrick's brother (Martin b. around 1833) went to Dublin and his Great grand son is my Dad so my parents are 3rd cousins.... Patrick and Martin were sons of Richard Keeffe who married a Murphy - probably early 1800s - 1830s. Hope this helps/ -- Regards -- Gráinne O'Keefe"

Some other Irish O'Keeffe clans are from County Tipperary (Carrick-on-Suir), which is the next county to the west of County Kilkenny. Kevin O'Keeffe surmises, as I do, that all of these clans are related. Thank you to John "Jack" O'Keefe of New York for his invaluable assistance regarding the Coolnahau Keeffe's.

Keeffe, Keefe, O'Keefe and O'Keeffe are anglicized versions of the Irish sept of O'Caoimh, from caomh, meaning 'kind' or 'gentle'. The O'Keeffe clan/sept originated from around Glanworth and Glenville near Fermoy, County Cork. The Normans forced them and most of the sept westward, where they settled in North Cork near the Kerry border between Ballydesmond and Millstreet in an area still known as "Pobal O'Keeffe". This was in the barony of Duhallow and included the parishes of Dromtariffe, Cullen, Nohoval, Kilmeen, and a part of Clonfert. Kevin O'Keeffe says that some of the sept remained in the area close to their original territory, and it may be from these that the O'Keeffe's of Carrick-on-Suir, South Tipperary are derived. It is not known if the Coolnahau and Cappagh O'Keeffe's are related to the Carrick-on-Suir O'Keeffe's or from this sept. There is an O'Keeffe Castle at Dromagh, Co. Cork (pictured above) where 5,000 plus Irish, including O'Keefes, were defeated at the Castle in 1651 in the Battle of Knockbrack (Cromwell's doing). A y-chromosome DNA test of males named Keeffe Keefe O’Keefe O'Keeffe would tell us what families are related to whom. See a lab that I have used for the Duerinck surname: Family Tree DNA


O'KEEFFE RESEARCH NOTES -- Please do not rely on the following research notes. Plans A, B and C are set out as theories until proven true or wrong

Keeffe/O'Keeffe: More research needs to be done in the Cappagh and Coolnahau parish records. I am trying to tie in Bridget O'Keeffe, wife of Patrick Bird, to John O'Keeffe, descended from the Coolnahau O'Keeffe's (subsequently shown above that Bridget O'Keeffe's father was Martin O'Keeffe, and Martin's father was John O'Keeffe. I have drawn out the following scenario's, which assumes that James O'Keeffe of Plan A, William O'Keeffe of Plan B, and Ancestor O'Keeffe of Plan C, were either brothers or cousins, and which certainly would need to be checked in the records:

Coolnahau O'Keeffe (Plan B): This plan surmises that William O'Keeffe from Coolnahau was the father of the John O'Keeffe who married Alice O'Keeffe, a cousin, by dispensation.

"Book of Munster", written by Father Eugene O'Keeffe circa 1703
"Families of County Cork, Ireland". One of the historic hardbound volumes from the 32 book set on Irish Families from the Irish Genealogical Foundation (IGF). Book of Irish Families, Great & Small, Volume 4 by Michael C. O'Laughlin. This is the story and history of families in Co. Cork. Some of the families given a full column of coverage include: O Keeffe O'Keefe. Peruse the book and all the Irish names in its index at amazon.com.